We’re living in a time where craft beer is wildly popular, and the city of New Orleans has not only jumped on the bandwagon, but capitalized on the trend. South Louisiana isn't new to the beer making scene, since 1986 we’ve had Abita Brewery, a cultural staple to locals and a taste of NOLA to those around the world. But in recent years, microbreweries have started popping up throughout the city, becoming part of what makes our town so great. Here are three of my favorite breweries that have simply fantastic IPAs that you’ve got to try:

Urban South is a relatively new addition to the NOLA brewing community, but is making a huge impact on the scene, especially with their chic flamingo inspired brew - Paradise Park. The brewhouse is located on the Industrial end of Tchoupitoulas street and the space is awesome. Lined with arcade machines and beer turbines, this place is grownups’ playground. The Grapefruit IPA had just the right amount of citrus and tang, great for those who like something a tad bitter. It also, wasn’t too hoppy, making it a great choice for those who want to try an IPA, but aren't looking for anything too strong. 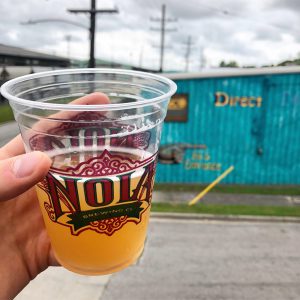 There’s tasty beer to be found at NOLA Brewing Co. This place is an integral part of the Crescent City brewing scene and should definitely be on any traveler’s bucket list. When it comes to IPAs, Hopitoulas should be top on your list to try. The name of the beer is a play off of Tchoupitoulas - the street the brewery is located on. The flavors are an unforgettable mix of citrus and pine with just the right body. Oh, and you have to get a platter of McClure’s BBQ (located inside the brewery), or a bag of crawfish during certain times of year. There’s never a bad time to go to check this place out, but the best time is on Fridays from 2-3 for one free beer and a brew house tour.

The final stop on my IPA tasting tour is a brewery housed in the Broadmoor neighborhood in a converted movie theater. Although the floor plan is pretty open - Wayward Owl wanted to keep some of the traditional roots of the old building alive, so there are plenty of movie theater chairs so sit in. When it comes to the beer, my favorite IPA was the Bird Bath. As if you needed an excuse to check out this spot every day, each day of the week features a new food truck on site. So, come hungry.